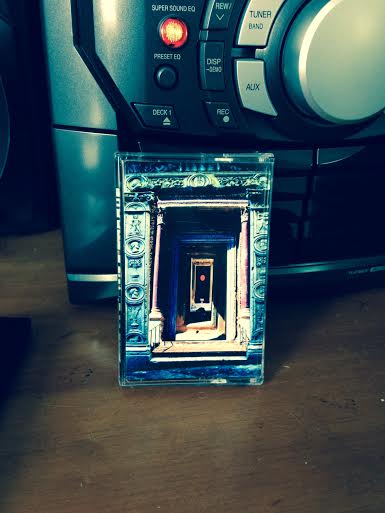 Bryan Lewis Saunders has been documenting his dreams for some time now, and The Pleasure Tunnel/The Temple of Paradise is a combination of those dream recordings, a lucid write-up of two events occurring back-to-back with similar lengths and sounds. It happened to be when Saunders had a lung infection, so there’s a breathless, nearly wheezing quality to his recordings that tend to make the listener feel a little claustrophobic. Arvo Zylo, runner of No Part of It and noise magician, decided to lay down a couple of tracks along with Saunders’ breathing, crafting a tense surreality out of Saunders’ dreaming.

Side A of the release starts with quite a long passage of Saunders’ breathing, somewhat spacious in its approach because of the way the channels have been mixed. It’s difficult to listen to; it sounds like someone struggling to breath, wheezing in gasps. It isn’t until a few minutes in that the noise begins to build, a slow droning cacophony that picks up depth as it grows. The whistles and wheezes of Saunders are still there, but the noise is enveloping, a bassy drive that closes in on the listener. It eventually comes back down again, like the end of a dream when it starts to fade away just before waking.

Side B starts a bit more abrasively and then settles into some whirring, echoing drones – dreamy, then collossal bass. There’s a disconnectedness to the sounds on this track, often cutting in and out between heavy and soft, jolting and mesmerizing. They’re punctuated by spaces of silence, the embodiment of a dream that continually fluctuates in setting, tone, and mood until it has completely shifted itself. Eventually the sound morphs into a repetitive spring creak, as though a door is continually opening, leading to the spoken word moments of the transcript. The static crash at the end is another moment of dream-like surrealism, the lull before the fall from a great height.

The Pleasure Tunnel/The Temple of Paradise is an intriguing listen from start to finish, and there’s a lot of things worth returning to in this package. Both artists have notes about the making of this tape, as well as a full transcript of both channels of Saunders’ dreams. It means spending time reading each transcript, allowing the noise to envelop in the process – perhaps then, one can very nearly enter the dreams of another.