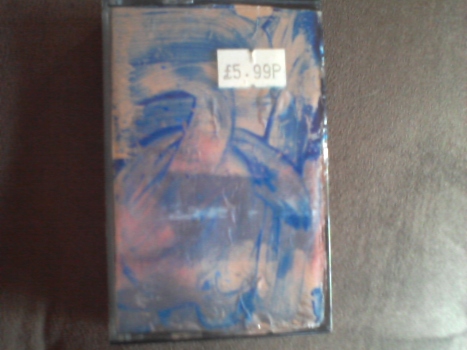 Here’s a weird proposition I received from Filthy Turd artist Darren – he’s doing a couple of odd releases where anyone who wants to receive his noise simply sends him a blank tape (preferably at least a C50, I’m guessing), and he’ll dub it with this Urdwygg the Golderr release. It’s all free except for the money you spend posting it to him, so if you’re interested, give it a go at his website. However, before you do, you might want to know what’s in store for you.

What I received (without posting a blank tape to him) was what I think is a C50, if I timed it correctly, on a Chan Chan Trujillo-Peru cassette, smeared with blue paint (so much so that the first time I popped it in it didn’t play). The j-card is also smeared with blue on foil, and apparently all of the covers are slightly different. It’s all very DIY and anti-capitalist, a statement in itself.

The noise, on the other hand, simply isn’t for me. The tape dubbing is really, really low, to the point where I’ve got to blast my stereo to hear it. That means I get a lot of tape mechanism wind as well, adding to the lo-fi quality. Both sides are long-running tracks of found sounds and little clicks of electronics, all strung together quite haphazardly. They’re fairly minimal affairs – there aren’t sounds that carry through the side, there aren’t harsh attacks or blasts of noise, and there aren’t really any moments to pick out on either side. It’s simply rough and tumble abstraction, random bursts of ideas or vocal samples or psycho-babble put to tape.

It’s here that we encounter what noise means to every one of us. Is it noise if it has a theme or an idea running throughout the course of the track? Shouldn’t noise simply be whatever we want, put to record? Yes and no. For me, I like my noise with a semblance of theme – it can shift and change, it can drop it sometimes, but I’d like to feel like there was an idea in mind. I just don’t get this with Cassette Psychic Vol. 1. But maybe some of you will like the various areas that Urdwygg the Golderr gets to – the groaning, the chirping, the barely audible snores. It’s not for me to decide if this noise is worth listening to, just to tell you how it seems to me. And you won’t get the same sound on yours anyway.